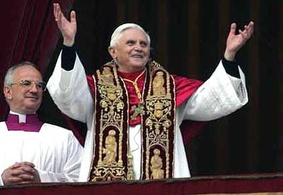 Chasubles:
№8 Synod
This Day in History of the Pontificate
News

Quote of the Day

That new beginning that bloomed among the ruins 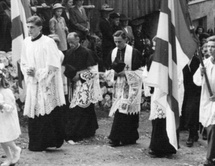 Inteview with Alfred Läpple, prefect of the future Pope at the seminary
«He said: I am Joseph Ratzinger, and I have some questions for you. Out of that came the friendship of a life. We have never lost sight of each other. And if there was anything to say, we phoned». A conversation with Professor Alfred Läpple, prefect of the future successor to Peter at the seminary of Freising. Of Joseph Ratzinger’s first work only two typed copies, bound in red Morocco exist. The gilt lettering on the cover makes clear that it is a translation, a German version of the Quaestio disputata of Saint Thomas on charity. One of the two ...read more

Blown clean away by a brush with Benedict 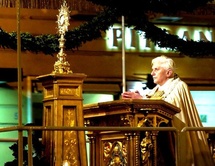 Marvelous essay
I KNOW, I know, so many things going on, but perhaps I could just tell you that on the Feast of Corpus Christi, I almost literally bumped into the Pope. In Rome for a few days, that Thursday afternoon I decided, by chance, to visit the cathedral of St John Lateran, Omnium Urbis et Orbis Ecclesiarum Mater et Caput, to give it its grand title, a title which, believe you me, it deserves.   The present vast basilica was built over the ruins of other basilicas, the first of which was constructed by the Emperor Constantine in the fourth century ...read more

Letters to the Pope
Write a letter

With filial affection and deep gratitude, I greet you in my own name and the name of my Auxiliary Bishop Eduardo A. Nevares and all the clergy, religious and laity of the Diocese of Phoenix, and I assure you of our best wishes and prayers as you prepare for retirement from the duties of the Petrine ministry. Even before you became pope, we knew and admired you, for you faithfully served the office of the pope who preceded you. For more than 20 years, you were Prefect of the Congregation for the Doctrine of the Faith, working as a close collaborator with Blessed John Paul II in his historic witness to Jesus Christ. The College of Cardinals, in one of ...